Feminism. What’s In a Word?

The conflicting narratives around the emergence of the word “feminism” have always puzzled me. Was it the utopian-socialist Charles Fourier who came up with the word in 1837,[1] the doctor Ferdinand-Valère Fanneau de la Cour in his medical dissertation in 1871,[2] the playwright Alexandre Dumas fils in 1872,[3] or the journalist Hubertine Auclert in 1882,[4] as is commonly written?

Chronologically, the word itself emerged in the 1820s in Italy. Lorenzo Martini, an eminent professor of physiology, used the word in a very different way in 1826 when writing about women authors: Specifically, he described the female gaze in the writings of the Irish author Lady Morgan as “feminist.”[5] In lexicography—the art of writing dictionaries—the term “feminism” appears in 1841 in Noah Webster’s dictionary[6] to describe “the qualities of females,” and in a French dictionary to describe a “system of feminisation” in in 1845.[7] In medical literature, the word was used in a pejorative manner to describe a pathology,[8] specifically “the feminisation of the male body.”[9] In the same line, for Parisian playwrights, “feminist” described men that supported women’s emancipation[10] or were womanizers.[11] In literary and art criticism, “feminist” highlighted the birth of the female gaze in American literature[12] and in French painting.[13]

The journalist Hubertine Auclert was the first to use it in the sense of women’s emancipation, in her feminist periodical La Citoyenne in 1883. The word was soon [14] adopted in feminist periodicals and in reference to the birth of an international movement in Paris.[15] 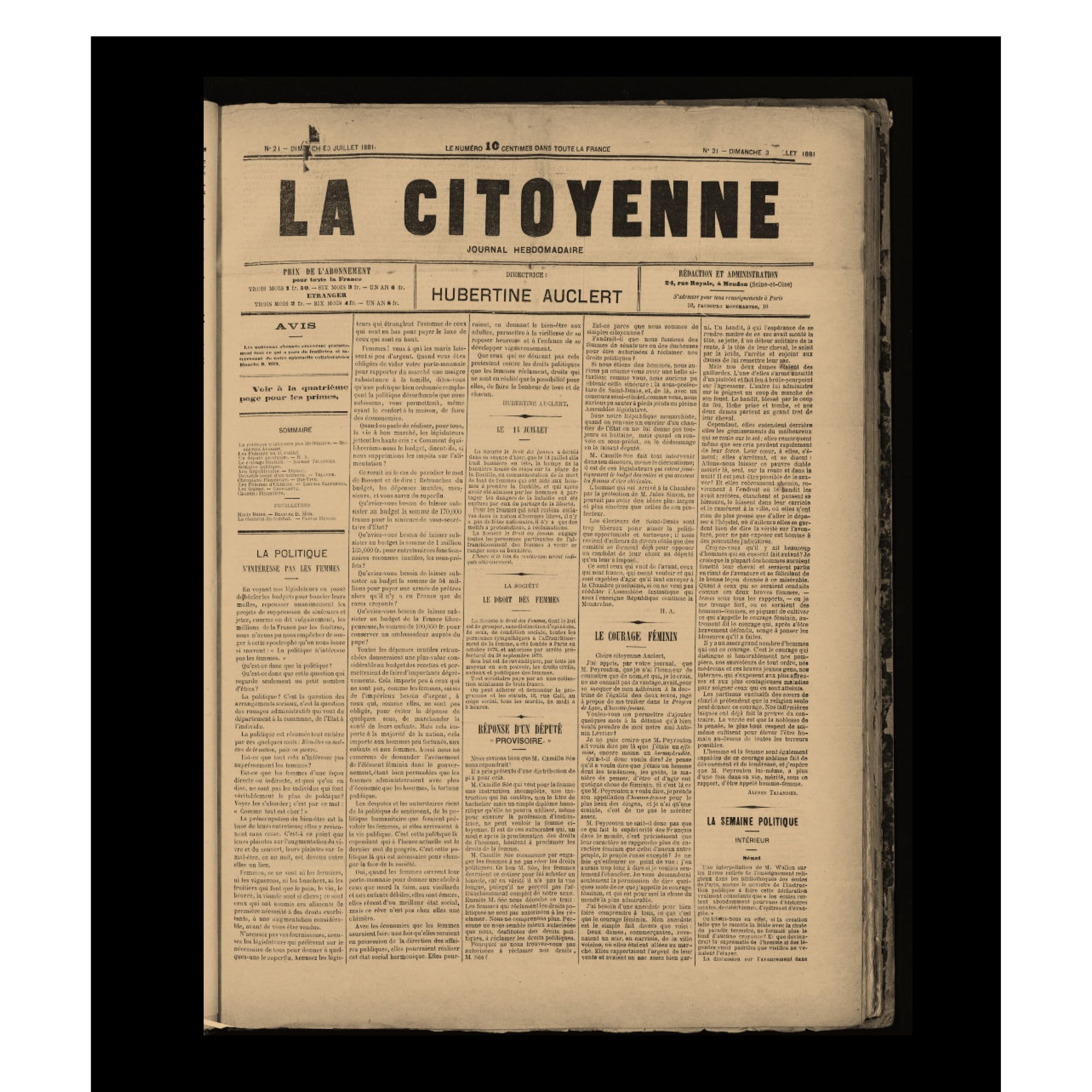 In the mid-nineteenth century, lexicography was at the crossroads of science, politics, education, and industrial publishing. Encyclopaedists such as the publisher Pierre Larousse were very successful. In 1896, the popular Revue Larousse published the first encyclopaedic periodical titled Les femmes et le féminisme, edited by the Polish playwright Marya Chéliga. She wrote two essays, with conflicting narratives. In her first essay titled “Les Hommes féministes” (“the male feminists”)[16], she credited the utopian-socialist Charles Fourier for having first penned the word in 1837, while in her second essay “L’évolution du féminisme” (“the evolution of feminism”),[17] Chéliga gave the credit to author and women’s activist Maria Deraismes, instead of Hubertine Auclert.

The authority of Larousse mistakenly established Fourier as the inventor of the word to this day (Chéliga’s second essay wasn’t taken with as much authority). However, even though Fourier was an influential figure in European proto-feminist circles, with views on women and worker’s emancipation, he never used the word in his writings.[18] 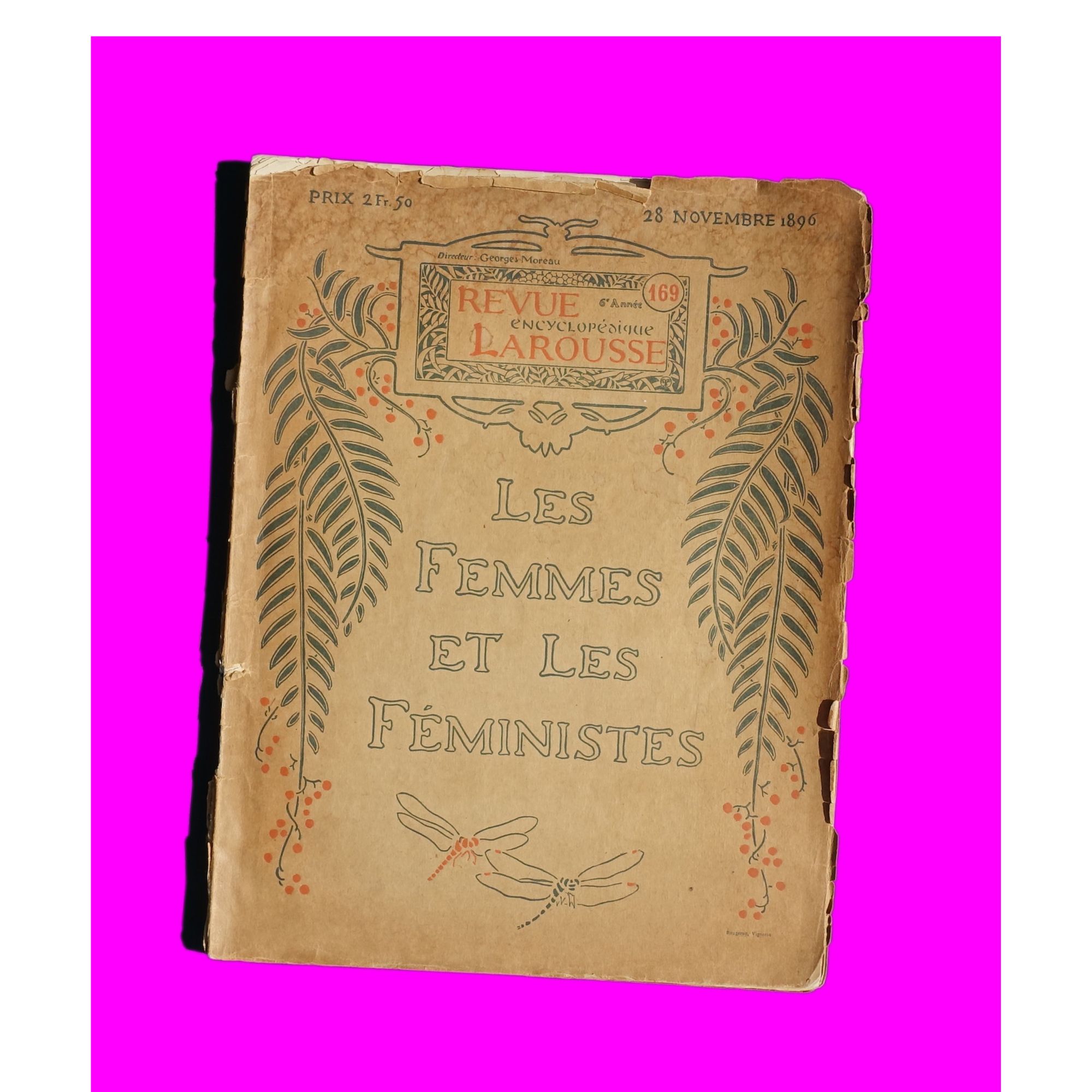 In her essay “les Hommes féministes,”[19] Chéliga controversially also listed Dumas fils as a “male feminist”: In his pamphlet L’homme-Femme (“The Man-Woman”),[20] published in 1872, Dumas fils had advocated for the right of a man to kill his adulterous wife—something legal under the Napoleon Civil Code of 1804. The theatre publisher Michel Levy, who had the exclusive rights on Dumas fils’ work, turned this misogynistic pamphlet into an instant bestseller, with 50,000 copies sold in 3 weeks, 49 reprints, and several subsequent translations. Levy had contributed to the industrialization of print and was Europe’s biggest publisher, therefore he had the capacity and the financial resources to be so responsive.

A close-reading of L’homme-Femme’s original cover reveals something unexpected. Dumas fils alludes to the fact that he wrote his pamphlet to promote his next play. He stirred intense controversy across Europe. Michel Levy or his competitor Emile Dantu published most of the 33 critical essays written in response to Dumas fils’ provocative text.[21] Known for their opportunism, the politics of these two publishers spurred the circulation of a misogynist definition of the word “feminism” across Europe and beyond. This continual overwriting, sensationalizing, and blurring of the word’s definition makes it difficult to trace feminist legacies to this day.

Delphine Bedel is an artist, lecturer, writer, and publisher. Her principal topics of interest are media, feminist publishing, and the global circulation of images. Her work is exhibited internationally. She is the editorial director of Meta/Books, and co-initiator of the Roadmap for Equality in the Arts in the Netherlands.